“Oh what a tangled web we weave, when we first practice to deceive”

Think you live in a ‘democratic republic’, Mr and Ms Merica, where every Merican is ‘free’ and has a say in what his government does and doesn’t do?

Well, Mr and Ms Merica, as usual, you are dead wrong again! 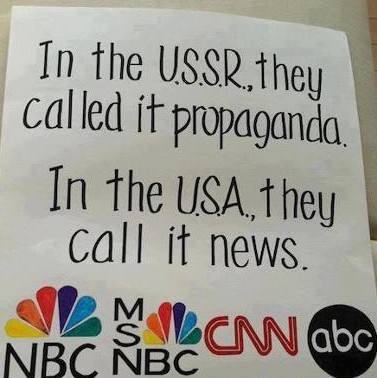 During the days of the Soviet Union, and in all dictatorial countries, the ‘news’ media were and are actually propaganda-media, which filter out information that the aristocracy (the people holding the real power, which in the Soviet Union were the Communist Party bosses) don’t want the public to know. Is the United States like that now?

I first came to the conclusion that the U.S. is a dictatorship in 2002, when I found proof that George W. Bush was lying to claim that he possessed proof that Saddam Hussein was rebuilding his WMD (weapons of mass destruction) stockpiles, and when the U.S. and UK ’news’ media hid this crucial fact that their heads-of-state were lying. Bush and British Prime Minster Tony Blair were arguing in 2002 against sending IAEA inspectors back into Iraq in order to verify whether or not Saddam was…

And the government lies surrounding 9/11 continue to be exposed! Agent In Charge of Amerithrax Investigation Blows the Whistle

The FBI head of the agent in charge of the anthrax investigation – Richard Lambert – has just filed a federal whistleblower lawsuit calling the entire FBI investigation bullsh!t:

In the fall of 2001, following the 9/11 attacks, a series of anthrax mailings occurred which killed five Americans and sickened 17 others. Four anthrax-laden envelopes were recovered which were addressed to two news media outlets in New York City (the New York Post and Tom Brokaw at NBC) and two senators in Washington D.C. (Patrick Leahy and Tom Daschle). The anthrax letters addressed to New York were mailed on September 18, 2001, just seven days after the 9/11 attacks. The letters addressed to the senators were mailed 21 days later on October 9, 2001. A fifth mailing of anthrax is believed to have been directed to…

Like every other twisted and perverse issue pertaining to the elite-swine psychopaths and associates, pedophilia has been either covered up or completely overlooked. The famous and/or wealthy and powerful can get away with anything, no matter how sick or heinous. But this is not the case with the no-name, no-money 'have nots' in this twisted … END_OF_DOCUMENT_TOKEN_TO_BE_REPLACED