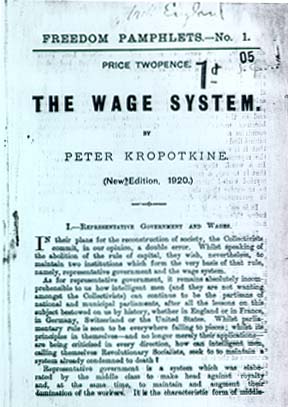 I. Representative Government and Wages

In their plan for the reconstruction of society, the Collectivists commit, in our opinion, a double error. Whilst speaking of the abolition of the rule of capital, they wish, nevertheless, to maintain two institutions which form the very basis of that rule, namely, representative government and the wage system.

As for representative government, it remains absolutely incomprehensible to us how intelligent men (and they are not wanting amongst the Collectivists) can continue to be the partisans of national and municipal parliaments, after all the lessons on this subject bestowed on us by history, whether in England or in France, in Germany, Switzerland or the United States. Whilst parliamentary rule is seen to be everywhere falling to pieces; whilst its principles in themselves –…

Image: quickmeme.com As a former teacher, I could not agree more with this author's estimations of and conclusions about the American public 'education' system. I was lucky. I taught music in an arts and academic, career-oriented high-school, so I had more control of how I taught my students than the poor academic teachers. Needless to … END_OF_DOCUMENT_TOKEN_TO_BE_REPLACED