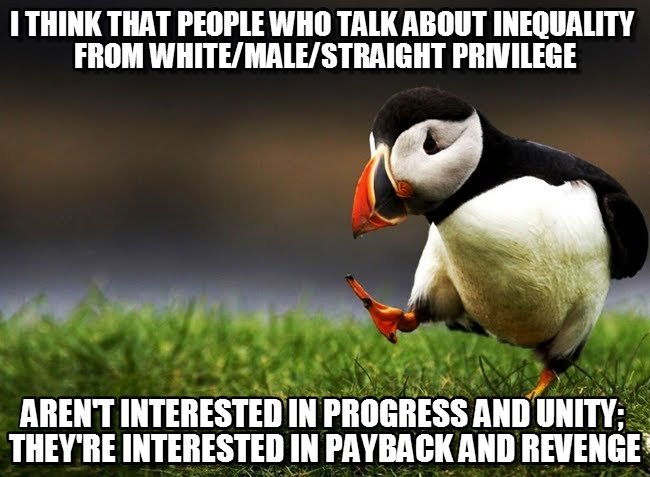 That’s strange, I seem to remember blacks taking credit for the so called civilization we exist in today? I seem to remember hearing many black historians stating, over the last half century, “If not for the ancient Egyptians, there would be no western brand of civilization today!” So, if these black historians were correct, isn’t CIVILIZATION A BLACK MALE CONSTRUCT, instead of “A White Male Construct”?

Would the politically-correct neoliberals please speak out of only one of their two faces at a time?! Please take some time and make up your ‘minds’, or in other words: SAY WHAT YOU MEAN! MEAN WHAT YOU SAY! And please, stop all of this whiny-ass BULLSHITTING!

The elite-swine divide and conquer tactic is winning the war against humanity! And all of us, no matter our color, race, or gender, will be the losers in the end. Of course, I know I am wasting my breath here, since revenge/retribution is evidently more important to some people than the survival of humanity and the planet:

A number of readers have turned out to be excellent research assistants. In response to my articles, “The American Left: RIP,” and the two follow-ups, “The Absurdities Mount” and “Goodbye Western Civilization,” readers have supplied the following.

A white male professor of philosophy has discovered that in order to have an academic career in these days he must find “white privilege” everywhere. Professor John Caputo, according to this report, https://downtrend.com/robertgehl/professor-calls-reason-itself-a-white-male-construct, has found white male privilege in reason itself.

Reason, says Professor Caputo, “is a white male Euro-Christian construction.” Since reason is white, reason is not neutral. It implies that what is not white is not rational. “So white is philosophically relevant and needs to be philosophically critiqued.”

Professor Caputo ties into University of California professor Sara Giordano who defines science as a “colonial and racialized form of power” that “must be replaced with an anti-science, antiracist, feminist approach to knowledge production.” https://www.campusreform.org/?ID=10021

I can’t say that this would be all bad. This way we wouldn’t have nuclear weapons and the frustrating digital age. But before I vote for it, I want to know what feminist science is. I have a disturbing feeling that it brings with it the genocide of the white heterosexual male. After all, if white heterosexual males are responsible for all the evil and ills of the world, how can we tolerate their existence?

The University of Oregon’s Jewish president was prevented by students from giving an university address this month about free speech. Free speech, declared the student protesters, perpetuates “fascism and white supremacy.” http://ijr.com/the-declaration/2017/10/1004087-protesters-block-speech-college-president-supporting-free-speech/?utm_campaign=Conservative%20Daily&utm_source=hs_email&utm_medium=email&utm_content=57696223&_hsenc=p2ANqtz-_lEYnedyjzkJdQg3N0OOoF5PhhKtm5yUGqIhbxb5fs878ae8aYjTk2wdWuWYc-7oq7BaJJbOQ6kJI-21n_qpeRECaKqA&_hsmi=57696223

Journalists seem to agree with the Oregon students. The European Federation of Journalists is leading a “Media against Hate” campaign against hate speech and stereotyping of illegal immigrants. https://www.gatestoneinstitute.org/11214/europe-journalists-free-speech In other words, any European who protests his/her country being overrun by foreign invaders must be shut up. The scenario in The Camp of the Saints is now happening before our eyes.

A British university has blocked a professor’s study of those who regret their transgender operation because it is politically incorrect and could damage the university’s reputation. http://www.dailymail.co.uk/news/article-4916026/University-bars-non-PC-study-transgender-operations.html The study, the university said, would be “transphobic.”

Police in England looking for the suspects who in a fist fight between feminist and transgender activists beat up a 60 year old woman refuse to assign a gender to the suspects for which they are searching, as it would be politically incorrect. “We have to be very careful,” said the Scotland Yard spokesman. http://www.dailymail.co.uk/news/article-5019051/Police-appeal-transgender-activists-beat-feminist.html

Now even Halloween is under attack. A Massachusetts elementary school has banned Halloween for not being “inclusive enough.” Instead the school will let the kids celebrate “black and orange day.” http://www.dailywire.com/news/22422/school-cancels-halloween-not-inclusive-enough-paul-bois#

If you permit your daughter a Halloween costume such as Disney’s Moana, you are encouraging your daughter’s “white privilege.” If you allow her to costume as Cinderella, you are reinforcing sexism. http://www.dailywire.com/news/22666/sorry-cosmopolitan-dressing-moana-halloween-isnt-emily-zanotti

Now we have the transgendered in kindergarten. http://www.washingtontimes.com/news/2017/aug/23/california-parents-feel-betrayed-transgender-revea/

Do you think a country as screwed up and divided as the United States is capable of standing up to Russia, China, and Iran? If not, what insanity is causing Washington to provoke these capable, determined and united countries?

Considering the economic, political, and cultural demise of the United States, how much longer do you think there will be a liveable life here?

The failure of America, indeed of Western civilization, seems to be total. How much longer can it last?

A reader’s comment on Universities: “Universities have become a place of UN-learning, where you unlearn culture, unlearn values like free speech, unlearn science and math, unlearn truth and thinking, unlearn objective truths like differences between males and females, etc. It seems the only thing taught now is hate, and you pay exorbitant sums of money to learn to hate.”