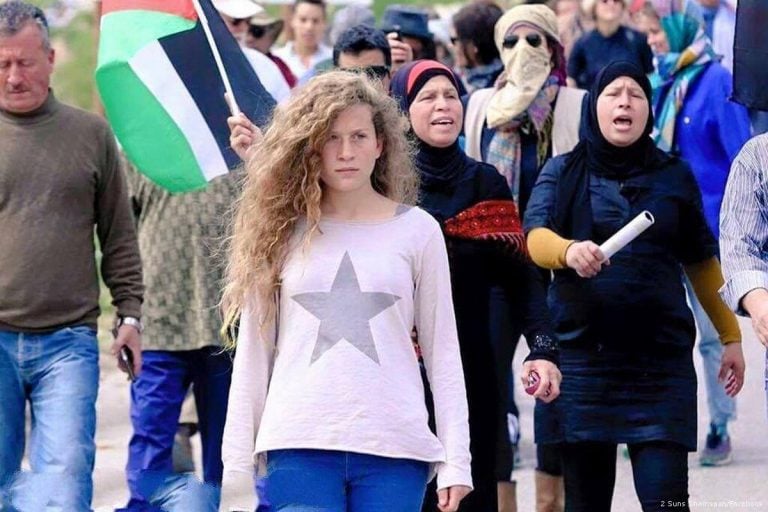 Sixteen year old Ahed Tamimi, a Palestinian, has and exhibits more intestinal fortitude (GUTS) than the vast majority of Americans and their (s)elected stooges.

Listen up, Mr and Ms Gutless Wonder, it isn’t just Israelis who need to learn from Ahed Tamimi, it is also you who need to learn from her, as well. Instead of whining about your so called ‘rights’ (elite-swine bones tossed your way), or a male hand “lingering too long on your bare back” (“#Me-Too”), stand up and do something about your Zionist controlled evil empire, which has been raping, pillaging and mass murdering you, your ancestors and the rest of humanity for the last two centuries-plus:

Sixteen-year-old Ahed Tamimi may not be what Israelis had in mind when, over many years, they criticised Palestinians for not producing a Mahatma Gandhi or Nelson Mandela.

Eventually, colonised peoples bring to the fore a figure best suited to challenge the rotten values at the core of the society oppressing them. Ahed is well qualified for the task.

She was charged last week with assault and incitement after she slapped two heavily armed Israeli soldiers as they refused to leave the courtyard of her family home in the West Bank village of Nabi Saleh, near Ramallah. Her mother, Nariman, is in detention for filming the incident. The video quickly went viral.

Western commentators have largely denied Ahed the kind of effusive support offered to democracy protesters in places such as China and Iran. Nevertheless, this Palestinian schoolgirl – possibly facing a long jail term for defying her oppressors – has quickly become a social media icon.

While Ahed might have been previously unknown to most Israelis, she is a familiar face to Palestinians and campaigners around the world.

For years, she and other villagers have held a weekly confrontation with the Israeli army as it enforces the rule of Jewish settlers over Nabi Saleh. These settlers have forcibly taken over the village’s lands and ancient spring, a vital water source for a community that depends on farming.

Distinctive for her irrepressible blonde hair and piercing blue eyes, Ahed has been filmed regularly since she was a small girl confronting soldiers who tower above her. Such scenes inspired one veteran Israeli peace activist to anoint her Palestine’s Joan of Arc.

But few Israelis are so enamoured.

Not only does she defy Israeli stereotypes of a Palestinian, she has struck a blow against the self-deception of a highly militarised and masculine culture.

She has also given troubling form to the until-now anonymised Palestinian children Israel accuses of stone-throwing.

Palestinian villages like Nabi Saleh are regularly invaded by soldiers. Children are dragged from their beds in the middle of the night, as happened to Ahed during her arrest last month in retaliation for her slaps. Human rights groups document how children are routinely beaten and tortured in detention.

Many hundreds pass through Israeli jails each year charged with throwing stones. With conviction rates in Israeli military courts of more than 99 per cent, the guilt and incarceration of such children is a foregone conclusion.

They may be the lucky ones. Over the past 16 years, Israel’s army has killed on average 11 children a month.

The video of Ahed, screened repeatedly on Israeli TV, has threatened to upturn Israel’s self-image as David fighting an Arab Goliath. This explains the toxic outrage and indignation that has gripped Israel since the video aired.

But more troubling is a media debate that has characterised the soldiers’ failure to beat Ahed in response to her slaps as a “national shame”.

The venerable television host Yaron London expressed astonishment that the soldiers “refrained from using their weapons” against her, wondering whether they “hesitated out of cowardice”.

But far more sinister were the threats from Ben Caspit, a leading Israeli analyst. In a column in Hebrew, he said Ahed’s actions made “every Israeli’s blood boil”. He proposed subjecting her to retribution “in the dark, without witnesses and cameras”, adding that his own form of revenge would lead to his certain detention.

That fantasy – of cold-bloodedly violating an incarcerated child – should have sickened every Israeli. And yet Caspit is still safely ensconced in his job.

But aside from exposing the sickness of a society addicted to dehumanising and oppressing Palestinians, including children, Ahed’s case raises the troubling question of what kind of resistance Israelis think Palestinians are permitted.

International law, at least, is clear. The United Nations has stated that people under occupation are allowed to use “all available means”, including armed struggle, to liberate themselves.

But Ahed, the villagers of Nabi Saleh and many Palestinians like them have preferred to adopt a different strategy – a confrontational, militant civil disobedience. Their resistance defies the occupier’s assumption that it is entitled to lord it over Palestinians.

Their approach contrasts strongly with the constant compromises and so-called “security cooperation” accepted by the Palestinian Authority of Mahmoud Abbas.

According to Israeli commentator Gideon Levy, Ahed’s case demonstrates that Israelis deny Palestinians the right not only to use rockets, guns, knives or stones, but even to what he mockingly terms an “uprising of slappings”.

Ahed and Nabi Saleh have shown that popular unarmed resistance – if it is to discomfort Israel and the world – cannot afford to be passive or polite. It must be fearless, antagonistic and disruptive.

Most of all, it must hold up a mirror to the oppressor. Ahed has exposed the gun-wielding bully lurking in the soul of too many Israelis. That is a lesson worthy of Gandhi or Mandela.

A version of this article first appeared in the National, Abu Dhabi.

Jonathan Cook won the Martha Gellhorn Special Prize for Journalism. His books include “Israel and the Clash of Civilisations: Iraq, Iran and the Plan to Remake the Middle East” (Pluto Press) and “Disappearing Palestine: Israel’s Experiments in Human Despair” (Zed Books). His website is http://www.jonathan-cook.net.