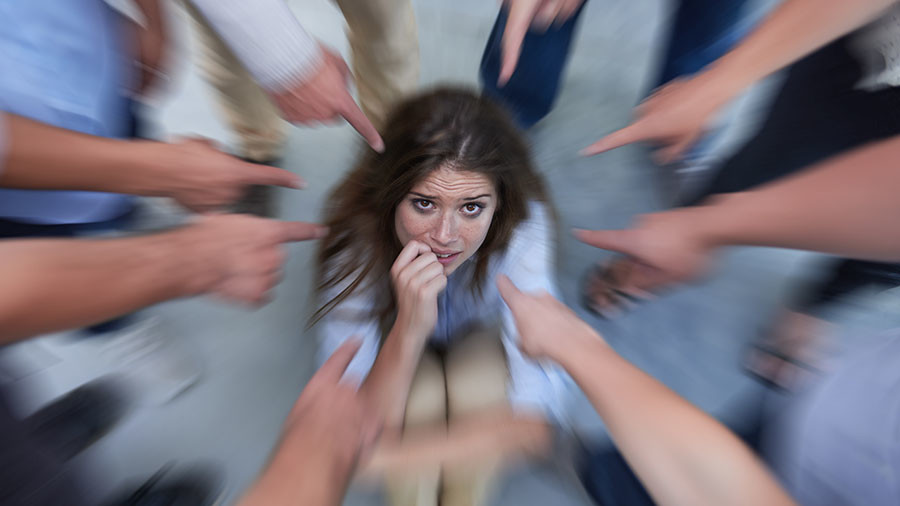 …You’ll have noticed by now, that the running theme in all of these stories is not tolerance, but intolerance. This overly politically correct culture of ours is churning out young adults who have been cocooned and coddled in safe spaces, who have had literature fed to them with trigger warnings, who can’t handle moral or political disagreements without throwing hissy fits, who are more comfortable organizing protests against free speech than fighting for it and who have no idea how to live and let live. They’ve been taught that their right to be offended and have the world fall in line trumps everyone else’s right to speak or to hold an opinion.

It’s no wonder that something as simple as a Halloween costume or a sculpture can send them into meltdown mode. The irony is, while the tolerance police are alienating well-meaning people by going after janitors for reading history books, protesting statues and campaigning for trigger warnings on books, the genuinely mean-spirited, overtly homophobic and racist people aren’t getting any nicer.

In other words, this ‘politically-correct/tolerant’, easily ‘triggered’, ‘safe-space’ seeking narrative isn’t changing the world for the better. If anything, all of this new-left, mind-fuck insanity is having the opposite effect; it is chasing away many of us who have always stood against hatred, racism and bigotry, and making us reconsider where we stand.

In the end, these new-left tools of the Zionist elite-swine, if they continue to have their asinine, insane way, will have caused humanity to be even more divided and at war with itself than it ever has been before. And this is exactly what the powers that be want; these psychopaths need us (humanity) to be at each other’s throats, especially now, as they continue their heinous, insane plans/agendas to tear the world apart, through continual war, rampant disease and economic collapse, and reinvent/rebuild it as they see fit:

Tolerance preachers fail to see irony of their own glaring intolerance

Danielle Ryan is an Irish freelance journalist. Having lived and worked in the US, Germany and Russia, she is currently based in Budapest, Hungary. Her work has been featured by Salon, The Nation, Rethinking Russia, Russia Direct, teleSUR, The BRICS Post and others. Follow her on Twitter @DanielleRyanJ, check out her Facebook page, or visit her website: danielle-ryan.com

On their mission to purge the world of thoughts and opinions that don’t slot neatly into their moral agenda and worldview, the increasingly intolerant tolerance police have done some severe damage along the way.
We are frequently bombarded with headlines and hand-wringing over meaningless controversies ignited by people who, I’m convinced, wake up in the morning desperate to find the next focus for their endless capacity for moral outrage. For the most part, these so-called scandals are initiated by those who identify themselves as liberals — and the lines of battle are drawn around issues of race, gender, sexual orientation etc.

Our hyper-sensitive social media culture lends itself perfectly to these kinds of non-controversies, where something as simple as a badly worded tweet can, within minutes, direct a storm of abuse and online bullying toward an individual. The end result can range from a person being forced to issue a public apology for their opinion, to losing their job — or even taking their own life.

The examples are numerous, but one recent case stands out.

This is the totalitarianism and petty tyranny of the liberal tolerance doctrine at work. It is not enough to have your opinion and let others have theirs. No, no. We must all share the same exact moral standards and worship the same ideals — or perhaps we deserve to die. At the very least, those who stray deserve to face an avalanche of public abuse before repenting and falling in line.

Ames’ suicide is one of the more shocking stories, but there are countless examples of these moral ‘controversies’.

When actress Lili Reinhart posted a picture of a woman in a Halloween costume — painted head-to-toe in black paint to resemble a mythical demon — she was immediately accused by other Twitter users of being racially insensitive, making fun of black people and of not seeing the ‘racist implications’ of the costume. Of course, Reinhart apologized and deleted the tweet — because that’s the only recourse following such an apparently massive indiscretion.

Perhaps one of these uber-enlightened individuals should release a rulebook for everyone else to follow. After all, it’s a minefield out there. So, I nominate the author of a blog post which warned parents of young girls not to allow them to dress up as Disney’s Moana princess for Halloween because it risks “making fun of” Polynesian culture. One can easily imagine the same blogger writing an article complaining that it was ‘racist’ if white girls didn’t want to dress up as Moana. But don’t be fooled into thinking it’s okay for white girls to dress up as white characters, either. Later in the post, the blogger warns that girls dressing up as Elsa from Frozen risks promoting white beauty, which is also highly problematic, apparently.

The internet is littered with these petty controversies.

When Vanity Fair recently poked fun at Hillary Clinton’s long career in politics with a video that advised her to get a new hobby in the new year, like “knitting” or “improv comedy”, it prompted yet another meltdown from the tolerance crew. You can’t tell a woman to take up knitting, they roared, that’s sexist! Or maybe…it’s just a joke? But don’t be silly, jokes aren’t allowed anymore. Never mind that it was a woman who made the comments about Clinton in the light-hearted video.

A couple of years back, the Museum of Fine Arts Boston was forced to cancel an event during which visitors to the museum would be allowed try on a kimono. One outraged group of individuals started a website called Stand Against Yellowface to fight the terrible injustice perpetrated by the Boston museum. But guess who didn’t care? Japanese people. An official from the Japanese consulate in Boston commented: “We actually do not quite understand what their point of protest is.”

Or how about this gem? A janitor at an Indiana university was accused of “racial harassment” for the crime of reading a historical book about the Ku Klux Klan on his lunch break. The book in question was Notre Dame vs. the Klan: How the Fighting Irish Defeated the Ku Klux Klan. Keith John Sampson, the 58 year-old janitor, who was also a student at the university, tried to explain that it was a history book, but that wasn’t good enough for the school’s affirmative action officer, who told Sampson that “his conduct constituted racial harassment” and that he had exhibited “extremely poor judgement” by reading it out in the open. You see, you must educate yourself about the history of slavery in the United States, but you can’t do it in public, because that could be offensive! Are you confused yet?

n another pathetic non-controversy, Wellesley College students started an online petition to have a statue of a sleepwalking man in underwear removed from their campus. The statue was part of an art exhibition. Within hours of its placement, the petition read, the sculpture had become “a source of undue stress” which caused “apprehension, fear, and triggering thoughts” for students who had experienced sexual harassment at the hands of men — although presumably not at the hands of scantily clad art installations.

Then there’s this guy, who thinks climate change deniers should be arrested. Or this guy, who thinks classic literature like The Great Gatsby or Mrs Dalloway should be marked with “trigger warnings” lest any fragile-minded student come across a passage which might upset their sensibilities. Professors should also “warn” their students, he says, about which passages in a novel may possess “triggering material” and which passages are “safer to read”.

Back in the real world, the average person will read a book’s blurb, decide if it sounds appealing to them, dig in, and then, if they happen to get offended somewhere along the way, they stop reading. It’s a simple process which doesn’t require trigger warnings or the implementation of new reading methods.

The potential for any comment to erupt into a firestorm of controversy is so worrying to today’s authors that hiring “sensitivity readers” in advance of publication has become commonplace. A sensitivity reader provides “feedback on issues like race, religion, gender, sexuality, chronic illness and physical disabilities”. Critics of sensitivity reading say that it could lead to “sanitized books that tiptoe around difficult topics”. It’s not hard to see how that could happen.

The tolerance police are afraid of the very concepts which they claim to hold so dear — like freedom of speech, choice and democracy itself. It doesn’t matter to them what anyone else feels or believes. Only their version of reality counts and only their moral compass is the correct one.

I recently came across a phrase I had somehow missed until now: No-platforming. It is the practice of banning certain groups from even taking part in a debate if certain cohorts find their views to be offensive. Take, for example, the fact that pro-life women were excluded from the Women’s March in Washington, D.C., last year because their particular views on one issue didn’t line up with the majority.

You’ll have noticed by now, that the running theme in all of these stories is not tolerance, but intolerance. This overly politically correct culture of ours is churning out young adults who have been cocooned and coddled in safe spaces, who have had literature fed to them with trigger warnings, who can’t handle moral or political disagreements without throwing hissy fits, who are more comfortable organizing protests against free speech than fighting for it and who have no idea how to live and let live. They’ve been taught that their right to be offended and have the world fall in line trumps everyone else’s right to speak or to hold an opinion.

It’s no wonder that something as simple as a Halloween costume or a sculpture can send them into meltdown mode. The irony is, while the tolerance police are alienating well-meaning people by going after janitors for reading history books, protesting statues and campaigning for trigger warnings on books, the genuinely mean-spirited, overtly homophobic and racist people aren’t getting any nicer.

It’s almost like this over-the-top, aggressive implementation of the tolerance doctrine isn’t really making the world a more tolerant place at all.

The statements, views and opinions expressed in this column are solely those of the author and do not necessarily represent those of RT.