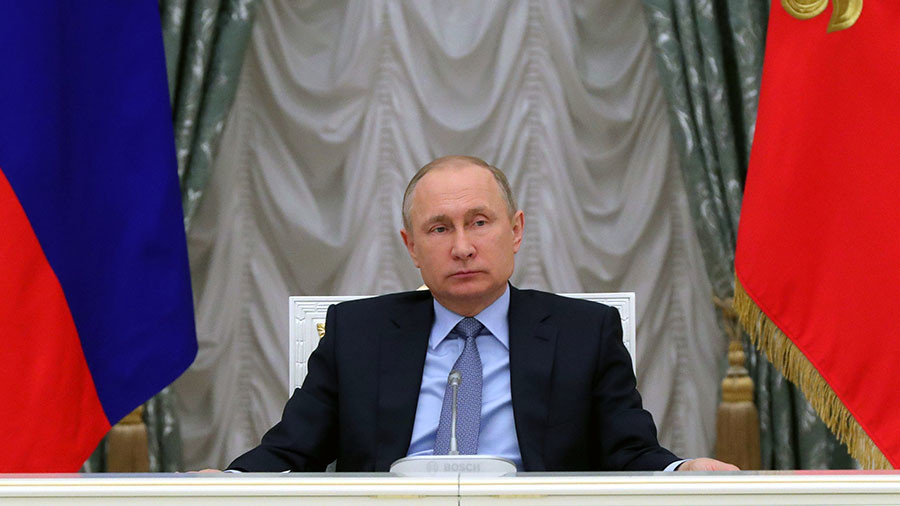 To all the red-white-and-blue Russophobes out there, show me one US president that has ever done as much for the American people as Putin has done for his people, since he was elected in 2000.

As Americans’ so called ‘leaders’ have continued to lie to them about ‘low’ unemployment rates and ‘economic recovery’, Putin has been spending this time acting on behalf of the Russian people who elected him. While the Zionist-Israeli elite-swine owned and operated U.S. Corporation has been waging continual war on the world, Putin has been rebuilding Russia from the disastrous mess it had been morphed into, after a decade of corporate capitalist rule.

You see, Mr and Ms America, Putin is a Russian; Putin is not a Heinz 57 variety mutt/mongrel, like you and your (s)elected officials. Putin knows who he is and where he came from. Can you make the same claim, Mr and Ms America? No you can’t, since there are no pedigrees to be found in this “shithole”; the only two legged creatures to be found in this pathetic “shithole” are mangy mongrels with an extremely false sense of superiority (“exceptionalism”).

Russians are an ancient people who have no need of a false sense of superiority. The Russian people know who they are; the Russian people have a history, and a culture worth preserving. Whereas you, Mr and Ms America, have no history nor culture.

The Russian people have never been defeated/conquered by another nation. Can you make the same claim, Mr and Ms America? No you can’t, since your 241 year old curse-on-the-world has never actually won a war, and it was conquered, right from the very beginning, by the English empire and the European/Zionist banking cartel: The English Empire, Part Deux!

The reason you hate Russia, Mr and Ms America, is because you are envious, you are jealous of who the Russian people are and what they have. And you should be envious and jealous of these people, since you are living a life (existence) of futility, chasing after the marsh-gas promises/prizes of corporate capitalism (“The American Dream” = NIGHTMARE!). And you also hate the fact that Putin refuses to kowtow to your genocidal brood of Zionist owned and operated stooges. You are scared to death that Putin will rise up and wipe you right off the face of the earth, aren’t you? And you should be:

Vladimir Putin was first elected as Russian President in 2000. Here’s how the Russian economy has transformed in the intervening years by numbers.

Before Putin’s election, Russia had a $9,889 GDP per capita by Purchasing Power Parity (PPP). The figure had almost tripled by 2017, and has now reached $27,900. Russia has the highest GDP per capita among its fellow BRICS countries, with the next-highest, China, having just $16,624. The PPP takes into account the relative cost of living and the inflation rates of countries in order to compare living standards in different nations.

Russia is the sixth-largest economy in the world by PPP, with a $4-trillion GDP. PwC has predicted that, by 2050, the country will become the largest economy in Europe by this measure, leaving behind Germany and the United Kingdom.

Back in 1999, the Russian economy by PPP was worth only $620 billion. So, in the last 18 years, Russian economic output in these terms has increased by 600 percent.

Inflation rates have decreased from 36.5 percent to 2.5 percent by the end of 2017. The total value of assets of the Russian banking system has risen 24-fold to $1.43 trillion. Capitalization of the Russian Stock Market has grown more than 15-fold to $621 billion.

When Putin was elected in 2000, Russia had just $12 billion in reserves, accompanied by a public debt, which was almost equal to the country’s economic output at 92.1 percent.

Things have changed markedly in 18 years, as Russia’s public debt has now shrunk to 17.4 percent of GDP and reserves have increased to $356 billion. Low debt and growing reserves helped the country to live through the economic crisis of 2008 and the recession of 2014-2016, caused by a fall in oil prices and Western sanctions.

Russian gold reserves have increased by more than 500 percent since 2000. The Central Bank of Russia (CBR) added 9.3 tons of gold to its reserves in December, bringing the total yearly holdings to a record 1,838.211 tons – worth over $76 billion in monetary terms.

The World Gold Council shows that Russia is the largest buyer of gold and is the world’s third-biggest producer, with the Central Bank purchasing from domestic miners through commercial banks.

While the Russian economy remains dominated by oil and gas revenues, its agriculture sector has boomed in recent years. Russian farmers produced their largest ever crop in the 2017 agricultural year, breaking the 40-year-old Soviet record, and harvesting more than 130 million tons.

In 2016, Russia became the world’s leader in wheat exports. Since the early 2000s, the Russian share of the world wheat market has quadrupled, from four to 16 percent.

Although agriculture still remains far behind the energy sector, it surpassed arms sales and became the country’s second-largest export.

Russia started exporting grain in 2002, selling a little over seven million tons. In 2017, Russia wanted to sell 45 million tons – an increase of more than 600 percent.