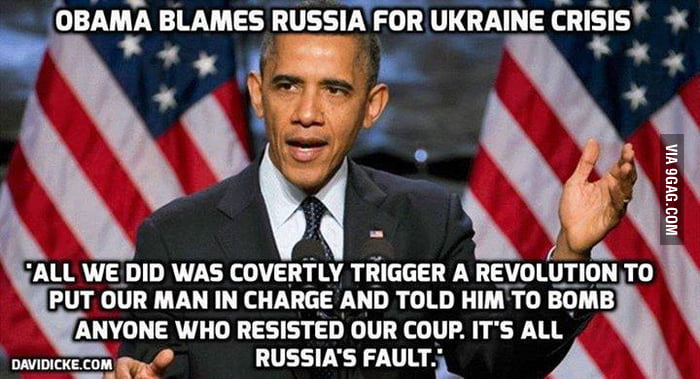 I love THE TRUTH:

Europe, North America and their allies (partners in crime) should simply sit on their backsides, weep and throw ashes on their heads, in shame and grieve over the horrors they put our planet through, for several centuries.

Instead the West is running around, barking, showing fangs, shitting itself out of fear that it may lose its control over the world and could finally be forced to play by the international rules.

It doesn’t even occur to it that it should, instead, get quickly admitted to a mental institution for particularly violent and sadistic patients.

Its Manager is not an anomaly. He was put there, ‘where he is’, by the people. Many of his dreams and desires are identical to those of the masses.

In the West, he is not the first Manager of this sort, and he is not the worst. He is part of that long tradition of tyrants. And this tradition has to stop, very soon, in order for our Planet to survive…

US – War Dog Wants to Bite, But What and How? It could be truly comical, if it were not to be so dangerous for millions of people living all over the world. The Empire, once mighty, ruthless and frightening is now jumping around like a dog infected with rabies; it is salivating, barking loudly, its tale is stiff between its legs.

It snaps left and right, and periodically it is even trying to bite a piece of Moon off. But the Moon is far, too far, even for the best armed and the most aggressive country on Earth.

Iran is much closer, and so are North Korea, Syria, Venezuela, Russia, China, Pakistan and other nations that have managed to land themselves on that proverbial shit list of the neo-colonialist World Order, manufactured by the West.

The General Manager of what the West likes to define as the “Free World”, is increasingly behaving like a hooligan and racist, insulting African countries which have survived both genocide and the slave trade, and which have been, for centuries, colonized, plundered and enslaved first by various European ‘enlightened’ states, and later by the coordinated efforts of the Western governments and multi-national corporations.

He is also offending and intimidating millions of Latin Americans; people of the Western Hemisphere who have been, for ages, falling under the infamous ‘Monroe Doctrine’ of U.S. foreign policy. The summary of that Doctrine has been basically this: do as we say and what is in the interests of the West, or we’ll overthrow your governments, murder your leaders or even directly invade your shores. Now ‘illegal immigrants’ from these countries are most likely going to have to leave the United States. Because they are poor (logically they are, after centuries of oppression and terror from the North), because they are not white, and because they are ‘uneducated’, or in summary, because they are not ‘Norwegians’ (the Manager would prefer Norwegian migrants).

Insulting people and nations is one thing, but bringing the world near a nuclear war is something quite different.

Increasingly it appears that the possibility of a new and horrid conflict (or conflicts) is nothing hypothetical. It is an absolutely realistic scenario, a great possibility, considering both the state of mind of the Manager, and even, progressively, the state of mind of the Western public, who seem to be totally out of touch with their position in the world and even with their own history.

In the meantime, a gruesome war dog is jumping all over, pointing in different directions, ready to bite, to devour, to bring to an end life itself on our Planet.

Who will be its first victim?

Is anyone ready to yield to a brutal force, to surrender out of fear, to accept the morbid, repulsive fate of conquered and broken nations like Afghanistan, Libya or Iraq?

Would any government be so insane as to allow the West to ‘liberate’ its people?

I don’t think so; not anymore. All the examples are just too horrid. It is better to fight a war, to fight for one’s freedom, than to become a colony, a broken, humiliated and usurped land. I saw what they have done to Afghanistan, to Iraq, to the Democratic Republic of Congo. I saw and I wanted to puke from what I witnessed, but instead wrote an 800-page accusation, from all over the world, called “Exposing Lies Of The Empire”.

The West has already run out of credit. There is no trust in it left. The entire world knows perfectly well what it is like to be colonized and controlled by both Europe and the United States.

The dog of war is searching for some weak point, where its fangs can begin tearing flesh apart. But suddenly, it seems that there is none. All points are hardened, tough.

Russia and China are standing firm and tall, their diplomats literally humiliating their counterparts from Western Empire by composed, powerfully sophisticated and refined behavior. But the militaries of both peaceful but mighty nations have recently been on constant alert: ready to defend their own people, and humanity.

Iran and North Korea are not yielding either. Syria is beginning to rebuild, despite the fact that the subversion, armed and supported from abroad, has not yet been fully defeated. Venezuela, Cuba and Bolivia are still there, standing upright, definitely not on their knees.

Suddenly, no one is ready to surrender. This is the first time in history that the Empire has faced such scorn from the rest of the world.

The more solid is determination of various countries not to allow themselves to get colonized, the more insane is the St. Vitus Dance of the West becomes.

The unwillingness to lose great privileges as well as the ‘ruling position’ of the world (including the ‘right’ to tell the rest of the world what is ‘correct’ and what is not) is also clearly embedded in the positions of various European and North American pseudo-left-wing publications, movements and parties: they were always ready to shed tears over the fate of the poor and oppressed people anywhere in the world, or ‘fight against war/for peace’, but they have been greatly allergic to those non-white nations that have been bravely proclaiming their right to march on their own path, or practically: to choose their own political and economic systems, as well as their way of life.

Imperialism, chauvinism and the cultural superiority complexes of the West have many different forms and shades. Almost no individual there is immune to these ills, if one doesn’t count those very few pure men and women who could be defined as internationalists. There are some of them even in the U.S., in the U.K. or France, but not many; not many at all.

In the past, those countries that were on the hit list of the Empire could only count on themselves. Lately, this has changed dramatically: now they can also count on each other.

And that is why the Empire is going to lose! There is already a global coalition against its terror. It is still forming and defining itself, but it is already strong.

The Empire knows that it will lose; it knows it intuitively, but it is still in denial.

It may still ruin dozens of millions of human lives, before it is over. Most likely, it will. But the era of darkness, of those monstrous centuries of colonialism, will soon be ended.

The citizens of the West should finally think about their own history. They should do some serious learning, educating themselves. Most of them are fully ignorant, including those holding various degrees. What have their countries done to Russia, to China, to Iran to Korea, in fact to the entire Africa, Asia, the Middle East, and to what is now called Latin America?

The atrocious history of the West is flowing into present, and if the course is not dramatically changed, it will keep flowing into the future.

Accumulatively, we are talking about hundreds of millions of human lives destroyed by the West throughout its colonialist and imperialist reign. Some statisticians are already talking about 1 billion.

This cannot be taken back, but the trend can be stopped.

The West has absolutely zero moral mandate to tell any country of the world how to behave. The world, despite the systematic brainwashing, is beginning to realize it.

If the West continues to bully its former and present victims, things will only backfire.

Europe, North America and their allies (partners in crime) should simply sit on their backsides, weep and throw ashes on their heads, in shame and grieve over the horrors they put our planet through, for several centuries.

Instead the West is running around, barking, showing fangs, shitting itself out of fear that it may lose its control over the world and could finally be forced to play by the international rules.

It doesn’t even occur to it that it should, instead, get quickly admitted to a mental institution for particularly violent and sadistic patients.

Its Manager is not an anomaly. He was put there, ‘where he is’, by the people. Many of his dreams and desires are identical to those of the masses.

In the West, he is not the first Manager of this sort, and he is not the worst. He is part of that long tradition of tyrants. And this tradition has to stop, very soon, in order for our Planet to survive.

These are brutal, dangerous and testing times. The ill, aggressive monster should not be allowed to totally destroy the world. Those who are already standing, should never surrender. Others should join. The survival of our civilization is at stake!

Andre Vltchek is philosopher, novelist, filmmaker and investigative journalist. He’s a creator of Vltchek’s World in Word and Images, a writer of revolutionary novel Aurora and several other books. His latest book: The Great October Socialist Revolution. He writes especially for the online magazine “New Eastern Outlook.”
https://journal-neo.org/2018/01/28/u-s-war-dog-wants-to-bite-but-what-and-how/

Source: US – War Dog Wants to Bite, But What and How? | New Eastern Outlook