If anybody thought the Trump administration would just release the Nunes memo and drop it, think again. In fact, Trump’s legal team backs the idea of a second special counsel to investigate the FBI and Justice Department

White House Deputy Press Secretary Raj Shah told reporters on Air Force One Monday that Trump’s attorneys have given the green light to starting the process of appointing a second special counsel to investigate the FBI and Justice Department’s behavior during the 2016 presidential campaign, according to a report by Axios.

In other words, expect a lot more anti-Russia outbursts from the Democrats in the days and weeks to come.

Bear scare! Why the US Democrats desperately need a Russian bogeyman

Robert Bridge is an American writer and journalist. He is author of the book, ‘Midnight in the American Empire,’ released in 2013. robertvbridge@yahoo.com 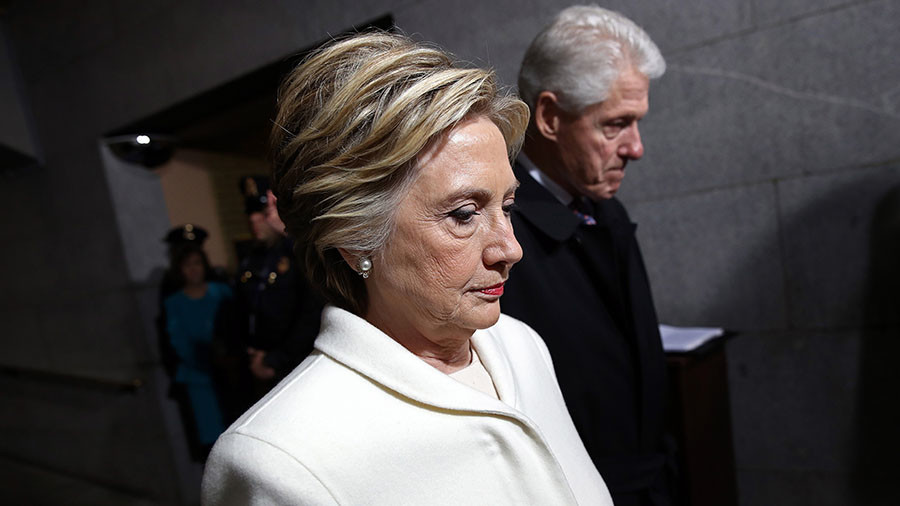 Even before Donald Trump set foot in the White House, loveless liberals were busy pushing the narrative that Russia meddled in the elections. But could this claim be – just maybe – a dastardly ploy to hide some unsavory truths?
Pass the popcorn, the theater of the political absurd known as ‘Russiagate’ continues without so much as an intermission. And with 13 Russian nationals now being indicted without rhyme or reason, perhaps it’s time to pause and reflect on the question the mainstream media conspicuously ignores: was the real meddlesome actor in the 2016 presidential election not the perennial bogeyman known as ‘Putin’s Russia’, but the Democratic Party itself?

Indeed, some highly questionable moves on the part of the Democrats before, during and after the elections go far in exonerating the Russian fall guy from any and all charges. You be the judge.

In a memo declassified by the White House and released to great fanfare by the House Intelligence Committee on February 2, it was alleged that on October 21, 2016, the FBI and the Department of Justice (DOJ) – armed with the notorious Trump dossier – secured a Foreign Intelligence Surveillance Act (FISA) warrant to conduct surveillance on Carter Page, a Trump campaign adviser.

But something looks rotten in Denmark. As it turned out, the explosive Trump dossier, compiled by former MI6 spy Christopher Steele, was bought and paid for by the Democratic National Committee (DNC) and the Clinton campaign. In other words, this represents – at the very least – a very big conflict of interest.

At the same time, in the their application for the FISA warrant, the FBI and DOJ “cited extensively” a Yahoo News article by one Michael Isikoff, which discusses Page’s July 2016 trip to Moscow.

As it turned out, however, there were serious problems with that article. As the Nunes memo states, Isikoff’s article “does not corroborate the Steele dossier because it is derived from information leaked by Steele himself…”

Indeed, Steele admitted that he met with Yahoo News “at the direction of Fusion GPS,” the firm that organized the dossier, in September 2016. Meanwhile, the mainstream media has largely played down these glaring violations of FISA protocol, as it continues to heap scorn on Russia.

“Putin’s KGB-inspired maneuvering of the United States via Donald Trump and the Republican Congress has all the earmarks of a carefully planned, professionally executed war game in which Trump, congressional Republicans and some in right wing media are his comrades,”wrote Cheri Jacobus in USA Today.

The specter of the Russian bogeyman is truly the gift that keeps giving.

In March 2015, the news broke that Hillary Clinton, while serving as secretary of state, had used her home computer while handling classified government documents. An assortment of experts and politicians accused Clinton of violating State Department protocol.

On July 5, 2016, following an investigation, FBI Director James Comey said Clinton had been “extremely careless” in handling her email correspondences. He added that “no reasonable prosecutor would bring such a case.”

That statement did little to calm the critics, however, as Clinton was haunted by the ghosts of emails past right up to the eve of the elections.

On October 28, 2016, the FBI said it was reopening its investigation into Clinton’s private email server after messages were discovered on the computer of top aide Huma Abedin’s husband, Anthony Weiner, who was then embroiled in a sexting scandal. Comey announced just before the elections that nothing had changed in the Clinton case, which had been closed four months earlier without criminal charges.

However, the email saga refuses to go away as the DOJ once again reopened its investigation into Clinton’s email server in January.

To this day, Hillary Clinton has been able to divert attention away from the very serious charge of handling classified government emails over her private server thanks to a giant smokescreen known as Russia, the bogeyman that conveniently explains every transgression and setback by the Democratic Party.

In July 2016, the DNC suffered a broadside after WikiLeaks released a batch of emails purporting to show that Debbie Wasserman Schultz, the chairwoman of the body, was actively conspiring against the campaign of Senator Bernie Sanders. Naturally, this news had a way of upsetting those donors who contributed funds to the Sanders campaign. Wasserman Schultz resigned in disgrace following the revelations.

Despite there being a deliberate effort to undermine the Sanders campaign, that disturbing news was sidelined by the conspiracy theory that a Russian army of apparatchiks hacked the DNC computers, turning over the information to Julian Assange. To this day, no evidence has been provided to support that claim.

Meanwhile, Wasserman Schultz was eventually cleared of rigging the Democratic primary in favor of Hillary Clinton, while Russia continues to suffer from mainstream media mudslinging.

One of the most shocking revelations to come from the leaked/hacked DNC emails was the claim that Donna Brazile, interim chairperson of the DNC who once worked at CNN, used her inside connections to feed Hillary Clinton the questions to several of her public debates against Donald Trump.

Following the DNC debacle, Brazile hoped to cash in on the scandal by publishing a tell-all book entitled, ‘Hacks: The Inside Story of the Break-ins and Breakdowns that Put Donald Trump in the White House.’

In one particularly candid part, Brazile said she was secretly concerned about Clinton’s health as Election Day drew closer. This comment did not sit well with Brazile’s former colleagues. Clinton’s staffers published an open letter in response to the book, saying, “It is particularly troubling and puzzling that she would seemingly buy into false Russian-fueled propaganda, spread by both the Russians and our opponent, about our candidate’s health.”

Once again, Russia was used and abused as the convenient 11-time-zone Band-Aid that can cover any political wound, whatever the size. What is the most surprising about this tactic is that anybody still falls for it.

Given Hillary Clinton’s past track record for advocating on behalf of military adventures, most memorably in Iraq and Libya, the tall tale of Trump-Russia collusion appears to have been a desperate effort on the part of the establishment to get their candidate into office and the military industrial complex into another war.

According to the Center for Public Integrity’s review of Federal Election Commission data, over a 14-month period (January 2015 through February 2016), Clinton and Sanders jointly received at least $765,049 from employees of major defense contractors – more than twice the $357,775 sum received by the Republican Party presidential candidates.

To prove the liberal media’s (and by extension, the establishment’s) apparent desire for military conflict, consider how it lavished praise on Trump after he attacked Syria’s Shayrat Airbase on April 7, 2017, America’s first unilateral military act aimed at the Syrian government forces (not the terrorists).

CNN analyst Fareed Zakaria waxed poetically, “I think Donald Trump became president of the United States,” he said dreamily. “I think this was actually a big moment.” On MSNBC, Nicholas Kristof, a regular Trump critic, said the Republican leader “did the right thing.” Elliott Abrams could barely contain his newfound enthusiasm for Trump: “…the Trump administration can truly be said to have started only now. The president has been chief executive since January 20, but this week he acted also as Commander in Chief. And more: He finally accepted the role of Leader of the Free World.”

Judging by such comments, had Trump continued bombing Syria, and thereby pacifying the hawks in Washington, there is a very good chance that Russiagate would have been quietly swept under the media’s carpet.

It would be difficult to name another US president who has suffered the slings and arrows of media scorn more than Donald J. Trump. And he’s only been in office for just over one year. Indeed, no sooner had his Inauguration finished there were already calls for him to be impeached. In fact, the subject has become so popular among the Democrats that there is even a special Wikipedia page dedicated to the relentless campaign.

Although the clamor to impeach the Republican leader has subsided of late, when the idea does raise its head, the empty claim that Russia influenced the elections ranks high among the reasons.

Another reason why the Democrats would need to push the anti-Russia narrative is to protect the Clinton family from allegations that they personally profited from donations to the Clinton Foundation.

In January 2017, it was reported that the FBI opened an investigation into whether the Clinton Foundation accepted donations in exchange for political favors while Hillary Clinton served as secretary of state in the Obama administration, the Los Angeles Time reported, citing two anonymous sources.

“Critics have accused the Clinton family of using the foundation to enrich themselves and give donors special access to the State Department when Hillary Clinton was its head,” the article said.

The LA Times said that the Democrats have rejected the claims, saying that “Trump is trying to steer attention away from investigations examining…Russian attempts to influence the 2016 election.”

If anybody thought the Trump administration would just release the Nunes memo and drop it, think again. In fact, Trump’s legal team backs the idea of a second special counsel to investigate the FBI and Justice Department

White House Deputy Press Secretary Raj Shah told reporters on Air Force One Monday that Trump’s attorneys have given the green light to starting the process of appointing a second special counsel to investigate the FBI and Justice Department’s behavior during the 2016 presidential campaign, according to a report by Axios.

In other words, expect a lot more anti-Russia outbursts from the Democrats in the days and weeks to come.

The statements, views and opinions expressed in this column are solely those of the author and do not necessarily represent those of RT.